According to estimates by the Administration, this country’s debt to Gross Domestic Product (GDP) soared to 137.2% in 2021, the highest in history! Skyrocketing Inflation [2] is the end result of reckless spending and will disrupt the world economies for years to come.  All administrations have contributed to this travesty. 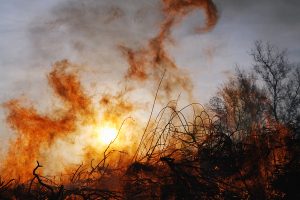 Retirees are first to feel the brunt of inflation, they have few ways to recover the higher costs they incur daily. Subsequent generations pay the ultimate price for their predecessors reckless spending through higher taxes, reduced services, and a lower standard of living.

This isn’t an action-packed movie-drama, it’s our lives and the facts speak for themselves. Both parties spend money that we don’t have, often times on grandiose plans that fail miserably, with no thought to fiscal restraint.

The IRS collected $4.1 trillion in 2021 [3] and refunded $1.37 trillion for a net collection of $2.973 trillion dollars after refunds. The federal government spent $6.82 trillion dollars in 2021 [4] by borrowed 56.5 cents of every dollar it spent! The federal reserve simply made a book entry for this deficit spending and then purchased that amount of our Treasury bonds to fund the government and flood the country with cash; driving inflation through the roof.

Their excessive spending hasn’t Improved since I wrote “Unreasonable Expectations – The Debt Crisis” [5]  January 2021 when the COVID crisis was the excuse for the shortfall.

When the average family or business requires a major expenditure, other activities are curtailed or eliminated entirely. Retirees on a fixed income must be creative to make ends meet. They dip into their savings, withdraw from their retirement accounts, consider a reverse mortgage if they are fortunate enough to own a home, and buy and do less overall.

That’s life, we can’t have it all and when we spend heavily in one area, it’s essential to cut back in others. The Federal government refuses to balance the budget by offsetting new expenditures with cuts elsewhere.

Over $60 billion has been sent overseas to support Ukraine’s war [6] with Russia. I understand the need for humanitarian aid and to help them negotiate a cease fire and peace treaty. However, the military equipment, ammunition, and hardware shipments that we continue to send could easily provoke another long-term war that we can’t afford or win. Some expect a protracted war that could last for years.

The senate is putting together another bipartisan multi-billion-dollar aid package! What we give them requires an equal or greater amount spent to replenish our stockpiles. Their European neighbors only contributed a small fraction of what we gave them to date.

Currently, there are over 30 conflicts worldwide. Wars rage in Ethiopia, Yemen, Syria, the South Sudan, and Ukraine. Instability in Argentina, Venezuela, other African nations, and elsewhere is rampant throughout the world. We can’t resolve everyone’s problems.

In this case, we are protecting Ukraine’s Sovereignty and borders while abandoning ours [7]! Millions of illegal aliens including hundreds-of-thousands of got aways [8] are flooding into our country. The President insists the border is closed and secure while the drug cartels ensure it is wide open for their drug smuggling and human trafficking enterprises. Some support the administration’s contention, however common sense prevails, and the numbers don’t lie.

Last year over 100,000 Americans died from the Fentanyl smuggled across our southern border! The U.S. Customs and Border Protection Services [9] reported that 3,686,466 illegal immigrants crossed our border since the beginning of the 2021 fiscal year. The vast majority were single adults. Unfortunately, major media outlets refuse to cover this crisis; Americans know little about the severity of the situation.

To put this into perspective, the number that entered our country during this time period is more than the combined populations of South and North Dakota, Alaska, Vermont, and Wyoming!

According to The Washington Times [10], “The U.S. has added more than 2 million immigrants to its population since President Biden took office in 2021, the vast majority of them here illegally.” The immigrant population growth occurred even though about half of those crossing the southern border illegally are allegedly returned to their country of origin!

How long can we sustain this influx of humanity without this country’s support systems collapsing? There is little vetting of those entering our country and none for the got aways. This is a national security, local community, and law enforcement nightmare.

The mayors of New York City, Chicago, and DC are complaining about several thousand immigrants arriving by bus over the past year from the southern border. Imagine what the local communities on the border are going through as tens of thousands enter their towns weekly. 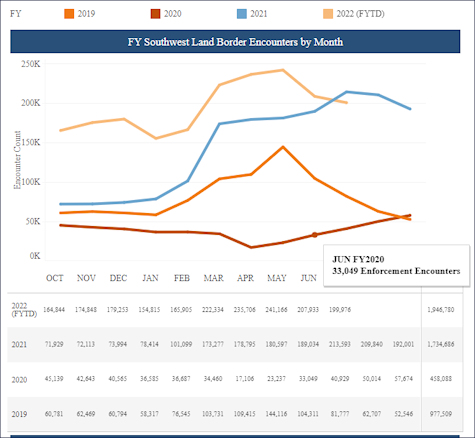 The Vietnam war escalated during the Kennedy Administration soon after military advisors were deployed in country. It didn’t take long before troops, in the tens of thousands, were enroute to this foreign land. My draft notice arrived 5 months after high school graduation when the war was raging, thousands of our youth were dying, and tens of thousands, like myself and many of my class mates, were called to fight this war. The Vietnam War claimed the lives of 58,000 U.S. troops!

Ukraine sounds much like the beginning of the Vietnam war, except in this case we are poking a bear with nuclear weapons and hypersonic missiles that our defense systems can’t shoot down!

Recently a bipartisan congressional delegation suggested placing American military advisors in country. Imagine what could happen with that! Albert Einstein defined insanity as doing the same thing over and over again and expecting different results.

We were attacked on 9/11/2001 and the Afghanistan war began with an international military coalition led by the United States that toppled the Taliban-ruled Islamic Emirate and establishing the Islamic Republic three years later. Instead of leaving, we stayed for 20 years to nation build and support the new Islamic state that was destined to fail. The chaotic withdrawal of American troops last year, accentuated the problem with nation building and the ineffectiveness of our intelligence apparatus.

Forbes reported [11], “In the 20 years since September 11, 2001, the United States has spent more than $2 trillion on the war in Afghanistan. That’s $300 million dollars per day, every day, for two decades.” Another example of out-of-control spending that was spearheaded by both parties.

We also tried this in Vietnam and Iraq. Many valiant American heroes honorably served during these wars and tens of thousands lost their lives, many others returned home maimed for life. Where does it end? We lost too many lives and treasure to end up right back where it began.

With over 500,000 homeless in America, rampant crime and lawlessness, high gas prices, open borders and drug crisis, the country in the midst of a recession, the highest inflation in over 40 years with many families living paycheck to paycheck, and a compromised power grid [12], our government is abdicating its responsibilities to the American people.

When fires arrive at your doorstep, most rational people would put everything else aside, and douse the inferno! Unfortunately, government appears to be fanning the flames and heading in the opposite direction.

Disclaimer: The information provided may not cover all aspect of unique or special circumstances, federal regulations, medical procedures, and benefit information are subject to change. To ensure the accuracy of this information, contact relevant parties for assistance including OPM’s retirement center. Over time, various dynamic economic factors relied upon as a basis for this article may change. The advice and strategies contained herein may not be suitable for your situation and this service is not affiliated with OPM or any federal entity. You should consult with a financial, medical or human resource professional where appropriate. Neither the publisher or author shall be liable for any loss or any other commercial damages, including but not limited to special, incidental, consequential, or other damages.